The International Day of Yoga was celebrated with enthusiasm by Brahma Kumaris in Sri Lanka by organizing a variety of events from June 1 to 21, 2022.

Sri Lanka ( Asia ): Brahma Kumaris Raja Yoga Centers in Sri Lanka organized a variety of events in their respective centers and in different venues in collaboration with different organizations, partnering with the High Commission of India, and the Swami Vivekananda Cultural Centre, Colombo, to commemorate and celebrate IDY 2022.

The 1st day, the curtain-raiser event, was held on June 1st under the theme of ‘Blessings through Yoga’ at the Brahma Kumaris head office, Harmony House, in Dehiwala. Director of SVCC Dr. Rewant Vikram Singh inaugurated the event. Ms. Viji from Ashtanga Yoga Mandhir conducted a yoga session and a talk was given by BK Ambiga. Some 30 participants benefitted by attending and joining through Zoom.

On the 2nd day, the event was held under the theme ‘Benefits of Raja Yoga’. A Yoga session to increase the immunity, as well as sharing experiences and creative meditation, were conducted by young brothers of Brahma Kumaris who would like to become meditation/ yoga teachers in the future and benefit society with spiritual insights. BK Sivamson, BK Dixsan, and BK Aji jointly coordinated the event. Nearly 16 participants benefitted by attending and joining through zoom.

The 3rd day’s event theme was ‘Yoga & Cooking’ for homemakers and those interested in quality cooking. BK Chandra conducted a Yoga Drill and BK Anbumalar delivered a talk on the theme. More than 25 participants benefitted by attending and joining personally and virtually.

The 4th Day’s theme was ‘Yoga and Power to Discern’.  The event started with a Yoga session with movement and creative meditation, while observing the breath with a commentary guided by BK Vani. This was followed by sharing of experiences, how practicing yoga helped in different situations to discern and face such moments. The session was conducted by BK Indra. Nearly 10 participants benefitted by attending personally and joining through zoom. 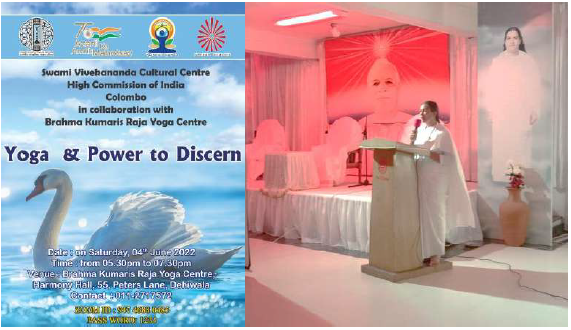 On the 6th June, following a yoga session conducted by BK Sivamsan, a Panel Discussion was held and BK Uthaya, Director of Statistics from the Government Census and Statistics Department, and BK Sekhar, an experienced meditation teacher, discussed and shared their experiences on the theme. The session was moderated by BK Dhinesh.

The 7th day event was conducted on the theme  of ‘Yoga and Power of Healing’ by BK Seelan.

On the 8th day, the theme was ‘Yoga for the mind and Body’ at Brahma Kumaris Center, Bambalapitya, Colombo. A yoga practitioner from the Aranyam Yoga center conducted a few yoga asanas for the participants. A panel discussion was moderated by BK Meena, and BK Dr. Arasi and BK Chandra participated as panelists.

On the 9th day, the program’s theme was ‘Yoga and Happiness’ BK Gobalachandran conducted a Yoga demonstration with a few asanas (yoga postures) and BK Ranjith shared his experiences, how he found yoga and how it helps him to remain happy even during challenging times. Nearly 14 participants benefitted by attending and joining through zoom.

On the 10th day, BK Aji conducted yoga asanas and shared his insights on the topic of ‘Yoga and Inner Peace’.

On the 11th day there were two events arranged in different venues.

One program, in Tamil and Sinhala medium, hosted by the BK medical wing, was held in the Wattala Brahma Kumaris Centre. Yoga Asanas were conducted by BK Indu. BK Dr. Viji gave a talk on ‘Body and mind health through Yoga’. Meditation was conducted by BK Dr. Indu and BK Dr. Chelvi.

After the program, a Raja Yoga pictorial explanation was presented, and a free medical check-up was provided to the participants by the doctors. Some 61 participants benefitted from the event.

On the 12th day, three events were organised at Jaffna, Wellawatte, and Narahenpitiya in the Tamil language.

In Jaffna, an event was organized on the topic ‘Yoga for healthy Mind and Body’. The event was coordinated by BK Ranji, BK Dr. T. Shyama, BK Dr. Sivasubramanium and team.

The 13th day’s event was conducted by BK Dr. Chelvi on the topic ‘Yoga & Transformation’.

Aji demonstrated a few yoga asanas related to the theme.  Some 14 participants joined in the event.

On the 14th, the event was held in Harmony Hall, Dehiwala, on the topic of ‘Yoga at Home and Work’.

BK Geetha conducted the asanas, BK Kalyani gave a talk, and the participants shared their experiences of how Raja Yoga help them practically in their day-to-day life. 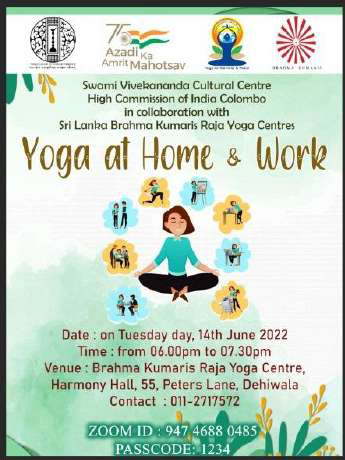 The second event was held in Negombo on the topic ‘The power to Discern, Decide, and Face through Yoga’. The program was organized by BK Sripriya.

The event was conducted by BK Manoharan at Hindu College, Mattakuliya, on the topic ‘Benefits of Yoga’. BK Inthu conducted the Yoga asanas.

On the 19th, there were two events organized, one at the Kotehena Centre and the other one at Dematagoda, for police officers. In Dematagoda, 37 Police officers participated. BK Baskaran organized the event and BK Ruwan gave the talk on ‘Cool Head and Warm Heart’.

On the 20th, the event was conducted by BK Thushy on the topic ‘Yoga and Dance’. She performed a dance related to the subject, demonstrated a few movements, explained the connection of dance movements and Yoga asanas, and then did a presentation on the same theme. Technical support was given by BK Puvanesh.

That same day, on the 20th, BK Vanitha participated, conducted asanas, and conducted meditation in a program organized in Nuwara Eliya by the Assistant Indian High Commission and the Lion’s Club of Nuwara Eliya.

BK Ganesh, the National Coordinator of Brahma Kumaris Sri Lanka, was invited and participated in the event with the team. The event, hosted by Her excellency Dr. S. Athira, The Assistant High Commission for India in Kandy, was held at the Police Stadium from 8.45 am to 10 am. The chief guest was Central Province Chief Secretary Hon. Gamini Rajaratne, along with Mayor Kesara Senanyake.

Vice Chancellor of Peradeniya University Prof. S. Lamawansa, Senior Deputy Inspector General of Police Sanjeewa Dharmaratne, the Municipal Commissioner, and 25 other senior Government officials were present.  About 250 participants received benefit. BK Ganesh welcomed the 5 VIPs with bouquets and gave blessing cards and Godly gifts.  BKs distributed blessing cards to all participants after a 10-minutes Meditation session by BK Subadra and BK Usha in Sinhala and Tamil respectively. Everyone was very happy as the atmosphere was charged with very calm, peaceful and powerful vibrations.

On the final day on 21st June, the High Commission of India, Colombo, organized a grand event at Independence Square, Colombo, with the support of the Swami Vevekananda Cultural Centre and Colombo Yoga institutions. Brahma Kumaris conducted meditation at the end of the event. BK Umakanthan was the instrument to conduct the meditation and the commentary was done in all three languages – Sinhala, Tamil and English. BK Geetha, BK Sivakumar, BK Sivamsan, BK Aji and BK Rakshida were among the Yoga demonstrators on the stage. There were about 500 observers, and about 30 BKs were among them. The program began at 6.30 am and ended at 7.30 am. The theme was ‘Yoga for Humanity’.

Prime Minister Hon. Ranil Wikremasinghe graced the occasion as Chief Guest and a few Ministers and highly respected leaders in the community were some of the active participants.

In Kandy, Brahma Kumaris also participated in the event organized by IHC, Kandy.

The programs were focused more on quality to reveal the secrets and benefits of spirituality and Yoga, especially Raja Yoga.

Special thanks to the High Commission of India Colombo, the Swami Vivekananda Cultural Centre (ICC) Colombo, Director of SVCC Dr. Rewant Vikram Singh, and Ashtanga Yoga Mandhir for their immense support to make all the events very successful. 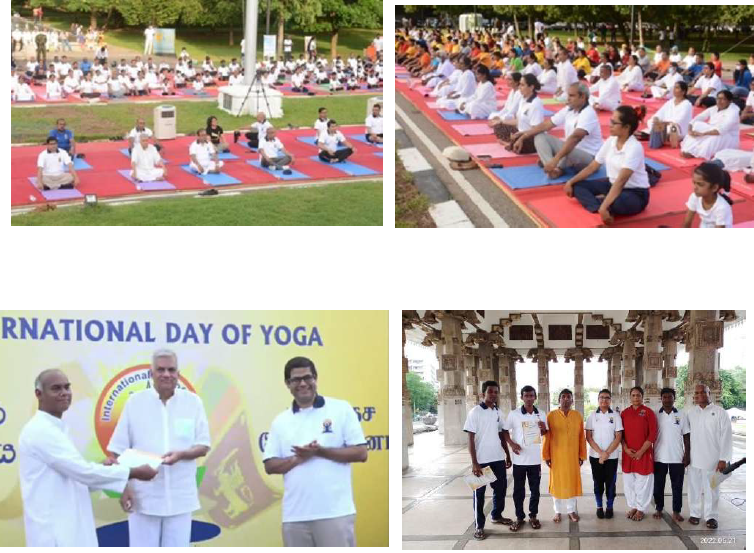