Itanagar ( Arunachal Pradesh ): Commemmorating ‘Azadi Ke Amrit Mahotsav Se Swarnim Bharat Ki Ore’, the local Raja Yoga Centres of Brahma Kumaris celebrated “International Women’s Day”  under the canopy theme “Gender Equality Today for a Sustainable Tomorrow” along with a National Campaign of ‘Women: The Flag Bearers of New India’ in Arunachal Vikas Parishad Hall, Bank Tinali, Near Police Station, Itanagar, in a befitting manner with spiritual ( not traditional religious ) piety, flavour, and gaiety. Women and men from all walks of life and eminent social leaders were present on the occasion.

‘Women are the real Flag Bearers of Golden Bharat. Her sacrifices in protecting our culture which is rich in values and much advanced in maintaining quality human relations compared to other countries have to be duly recognized. Her role in safeguarding our family values is significant’, opined Mrs. Higio Aruni, President, BJP Mahila Morcha, Arunachal Pradesh, and former Chief Councillor, Itanagar. She lauded the role of Brahma Kumaris in the field of women empowerment since its inception in 1936 which is completely headed and managed by women, that too most successfully. She said that today’s time demands total transformation, not mere superficial changes in people’s attitudes and actions. For this, Brahma Kumaris’ spiritual teachings and Raj-Yoga Meditation will go a long way, not only for reforming and refining but also for rejuvenating as she experienced herself, she said.

BK Jyoti Mishra, Director, APTECH, delivering the keynote speech said that “Women have now conquered every profession, from sky to sea, becoming an astronaut to a naval official. Women, apart from household chores, are now working in the society as doctors, engineers and many more.” She cautioned people against the dangers of gender discrimination and advocated for adoption of spirituality for ending gender-based inequality and cruelty. So through Raj-Yoga Meditation we can learn to use our time, energy, and resources in the most efficient way and achieve success and better productivity in every aspect of our busy lives. This forms the basis of a healthy, happy, positive, and successful life. We can truly recharge our lives by practicing Raj-Yoga Meditation. She emphasized that easy Raj-Yoga Meditation can be practiced by anyone to invoke our powers and true virtues within to have real gender equality for a Sustainable tomorrow.

Raj-yogini BK Junu, Chief of Brahma Kumaris, Itanagar, in her deliberation explained Raj-yoga as an effective way of connecting one’s inner self with the Supreme Soul, not only for inner health, happiness, and empowerment but also for realizing universal peace, harmony, and brotherhood. She urged all to practice a few minutes of Raj-Yoga Meditation daily. Then only can they perform their worldly roles better and can overcome their vices, addictions, ills, and ailments for good, she emphasized.
She called upon women and children to keep challenging themselves and improving continually. She cautioned against the rampant use of drugs including alcohol amongst youth in the state and called upon all women to take up the cudgel being empowered by Raj-Yoga Meditation for ending drug use in the state. She referred to mothers as architects of the society as they nurture the future generation. She called for all women to play an active role in curbing the drug addiction menace in our society.

Renowned legendary Artiste singer Taba Yall Nabam, said that “women are born leaders and managers, and have immense capacity to excel in any field.” Woman should work towards restoring our glorious culture thereby contributing towards nation-building. Regardless of what is going on around her, regardless of the mountain of negativities encircling every family, woman must learn to keep calm and protect her family. But this demands an enhanced mental capability which is possible if we can utilize the services of the Brahma Kumari institution which has been striving for woman empowerment through spirituality. In this regard, the activities of Brahma Kumaris need to be commended for their service in training people to stabilize their minds and achieving their set goals.

Dr. Sopai Tawsik, Joint Director, Medical Education, Govt. of AP, said that when the younger people themselves indulge in gender violence and exploitation and fail to honor women’s dignity, then those deprived youth need more empowerment at all levels – physical, mental, emotional, moral and spiritual. He said false ego, materialist goals, and subservience to sensuality are the root causes of today’s social and cultural pollution which has victimized the youth. Moral education and Raj-Yoga Meditation are needed more for today’s youth, for their all-around health and development, he stressed.

Advocate Smt Nabam Yahi Tad said, “We have achieved a lot in the field of gender equality, but we still have a long way to traverse,” while exhorting the womenfolk to be aware of their rights and responsibilities. Tad called for gender equality, saying that creating provision for gender equality in family, society, and government should not be considered as favor or duty but it should be a ‘way of life’. Brahma Kumaris’ spiritual teachings and Raj-Yoga Meditation will pave the path.

Speaking on the occasion, Prof. Dr. Jayadeba Sahoo, Faculty, PBKIVV & Professor ( former Dean and Head), Dept. of Education, RGU, recalled the high status of women in the ancient period as Our Vedic scriptures and hymns glorify the dignity of women and the (yatra naryastu pujyante ramante tatra devata- यत्र नार्यस्तु पूज्यंते, रमन्ते तत्र देवता ) in which Where women are honoured, there the deities are pleased. In fact, according to this theory, there is a sharp contrast between the glorious treatment of girls and women. He said that only that nation develops and prospers, where women are treated better with respect. I am a living example of how an inspiration given by a woman (my illiterate mother) can change the destiny of a person. Both women and men need spiritual empowerment by adopting triple Es – Enlightenment, i.e. true awareness, Empowered through RajYoga and to Enact our inner values for Golden Bharat.

“Women are physically mild, but not mentally. We have both potential and patience to do anything for poor families and society. From a simple vegetable seller, she has been corporator by cooperation from her husband,” Mrs. Yukar Yaro, Corporator, said. Kumari Jyoti Das enthralled all with a captivating dance to the song “Komal hain kamzor nahin tu. Shakti ka nam hi nari hain”.

All the speakers were against gender discrimination in all forms and for equal rights of women in all spheres starting from familial and social to workplaces. For that, they were of the view that women need spiritual empowerment as key to developing their determination, self-confidence, and self-reliance for excelling in all walks of life. 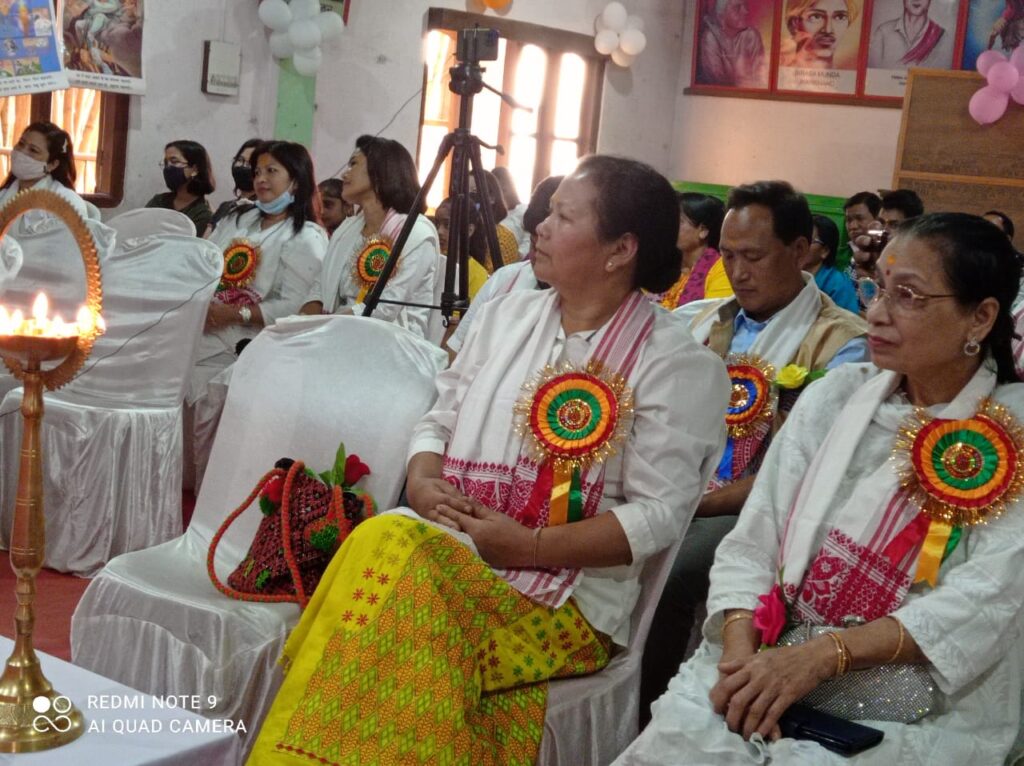 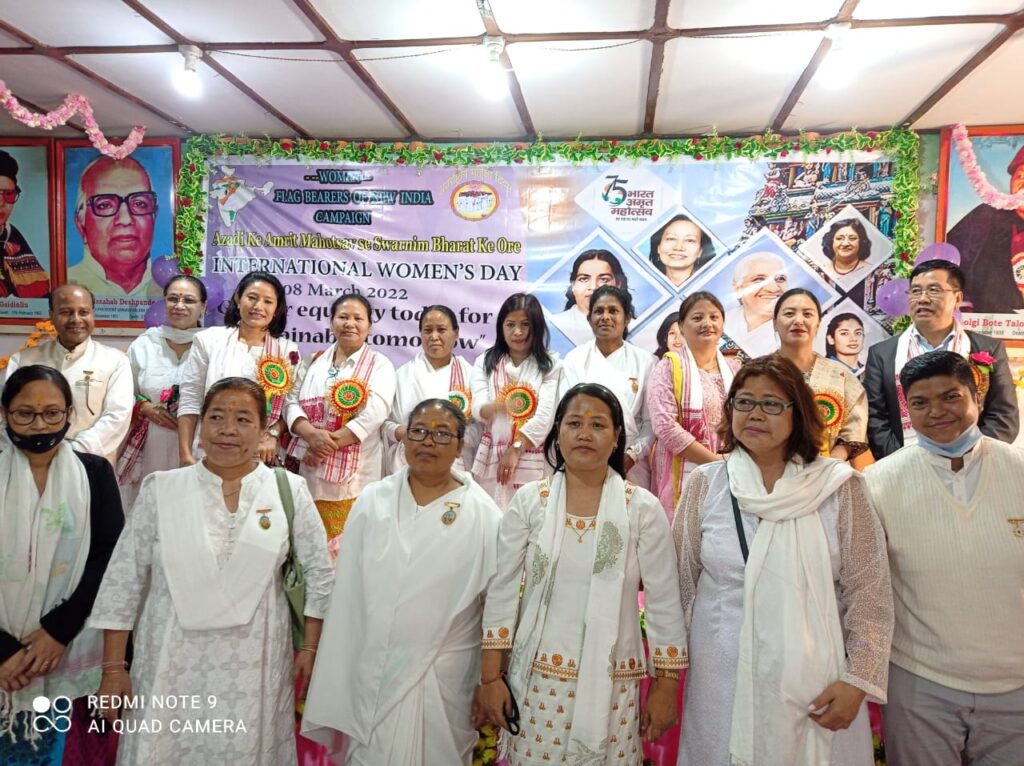