FIA chairman Ankur Vaidya said these records are dedicated to the global community and thanked the community for their support without which the feat would not have been possible. 1,500 volunteers were needed in order to break the record.

FIA especially thanked Brahma Kumaris for sending volunteers to help create history in this record-breaking event. At the onset of the planning phase, Ankur Vaidya and Parveen Bansal (FIA Event Chair) called Brahma Kumaris in NY and NJ to assist the project by sending brothers and sisters to participate in the flag hoisting.

Parveen Bansal said that the endeavor required massive efforts and the logistics were a big challenge in itself. The whole team of FIA volunteers looked towards Brahma Kumaris to help create an atmosphere of peace and calmness to allow for a successful event.

After the event, Parveen Bansal sent a beautiful message to Brahma Kumaris saying, “These two records would have been difficult to achieve without your involvement and commitment. You gathered your participants and brought them to the venue with the intent of seva. Please do convey our gratitude to each and every participant who traveled from various locations. Their passion, efforts and seva is much appreciated. I am personally humbled by witnessing so many people coming forward selflessly to be part of this historic event. The most disciplined, content and smart participants that I have ever come across have come. Your gesture to tie rakhi on my wrist during the event touched my soul and will always remain with me for the rest of life. In fact I opened my fast after the record with the toli(holy sweet) that you gave me. This was a great opportunity to self reflect and will help me personally to act /conduct calmly. Thanks to Brahma Kumaris for helping me with that.”

The FIA’s India Day parade is considered the largest parade outside India to mark the country’s independence and brings together thousands of members of the diaspora for one of the biggest cultural extravaganzas in the US. Because of the large crowds, it was very important to FIA to have Brahma Kumaris assist in keeping the energy light. When the Guinness Book of World Records began the judging process, there was an instant wave of stillness that spread through the 3 Manhattan blocks, which were closed to the public. In that moment, over 1,500 people stood in complete silence as the judges counted the number of flags being hoisted and awarded the Guinness Book of World Records to FIA. 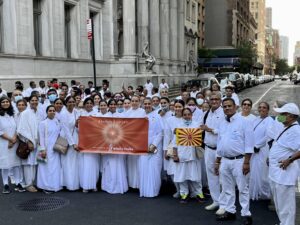 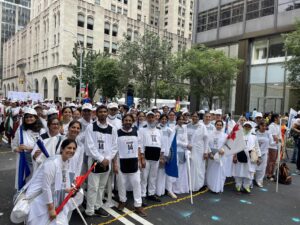 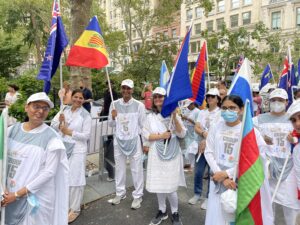 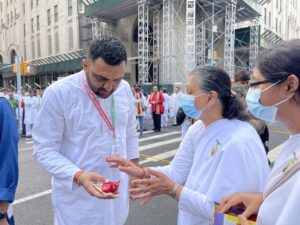 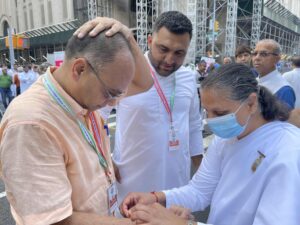 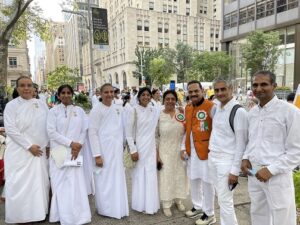 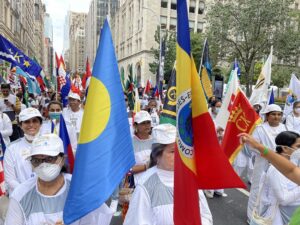 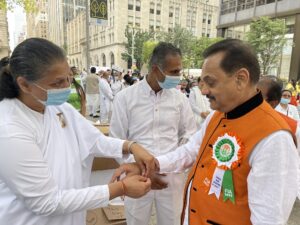