Madrid, Spain ( EU ): The Brahma Kumaris center in Madrid hosted a program in line with the United Nations Climate Change Conference COP 25 entitled “Creating Inner Resilience in Challenging Times.”  The program was attended by some 200 people and took place in a community center near downtown.  The city is beautifully decorated for Christmas and there are lights everywhere.  Joaquín Tamames from the Ananta Foundation welcomed everyone.  The Alborada Choir, all dressed in white, then came on stage and performed the Indian chant “Om Namah Shivaya.” 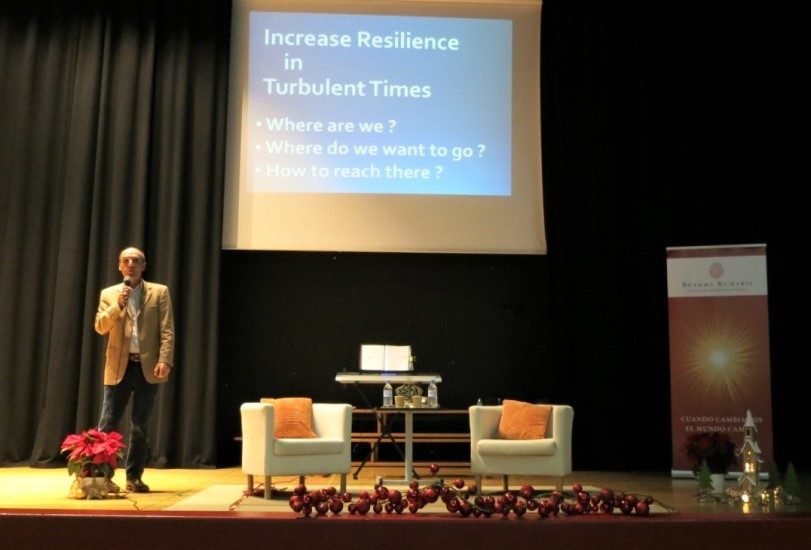 BK Golo was the first speaker, reminding the audience that we are already in the midst of climate change and in the future, Madrid’s weather will become similar to Marrakech, and London weather similar to Madrid.  He described BK renewable energy activities and how that helps to reduce the carbon footprint.  It also creates independence.  BK Golo asked us not to forget the five R’s of a green lifestyle: Rethink – Recycle – Reduce – Reuse – Refuse.  He ended with a powerful spiritual message, “When we connect to the Divine our inner world can change, and we develop the power to change the world”. 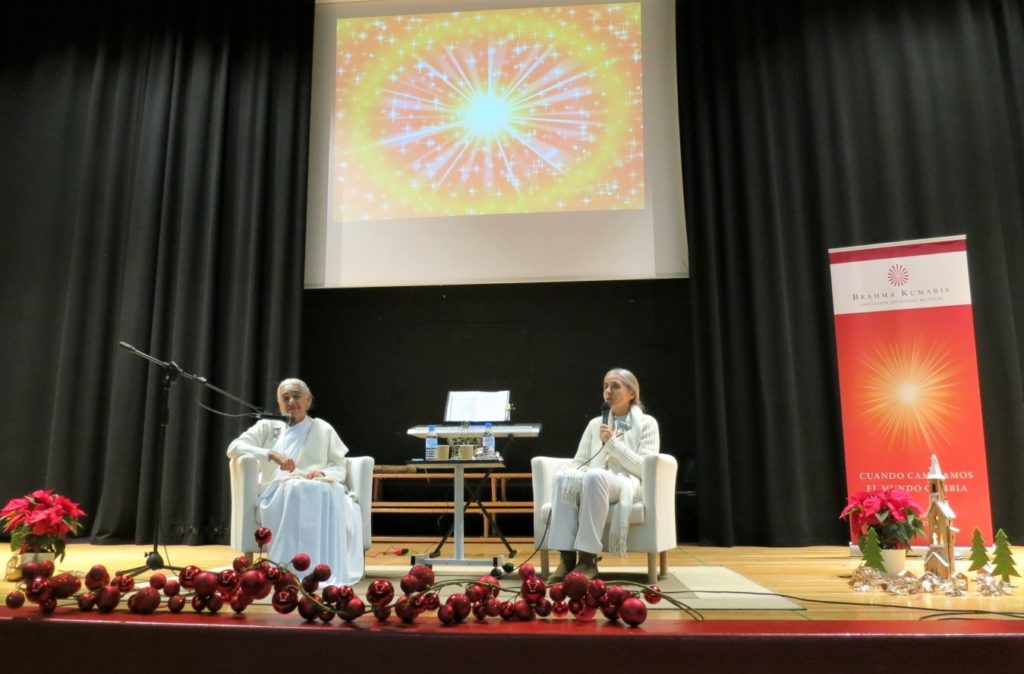 BK Sister Jayanti, Director of the Brahma Kumaris in Europe and the Middle East, spoke of the power of love.  In Spain, people have a big and open heart, so it is easy to talk about God.  What will happen to our inner temperature when the climate becomes unbearably hot? It will also rise.  Nowadays we don’t talk about climate change anymore, but about climate emergency.  But I am absolutely convinced that there is a better world ahead.  I believe in two things – the power of goodness in human nature and the power of God’s love.  If we use these two powers, we can deal with all the problems we have.  The essential message of Christmas is love, not only to buy gifts.

The Power of Love is an important starting point for a better world.  When I go inside with my mind, there is such a beautiful discovery, that I don’t need to look for love or happiness outside.  I have them within.

Practice talking to the self and to God.  When challenging times come, I will already have established a relationship.  My connection will be reliable.  When there is crisis, I ask myself, what can I learn from this situation?  I can learn co-operation and see the value in others.  The journey consists of many small steps. 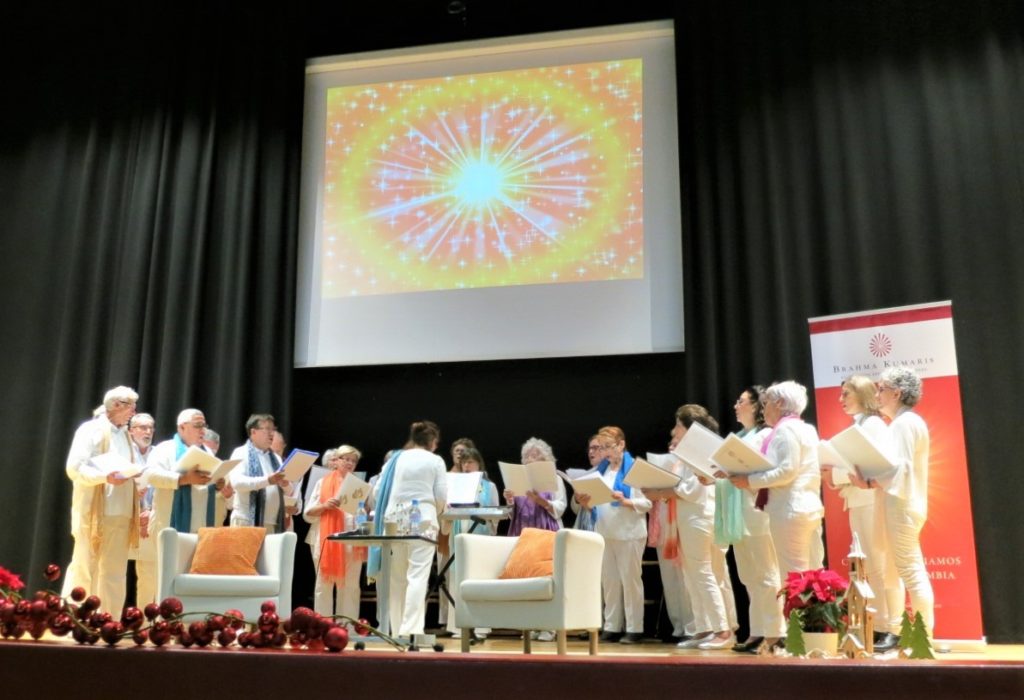 The beautiful evening ended with another song by the choir and eco Christmas gifts to all.

Opening of high-level plenum at the COP 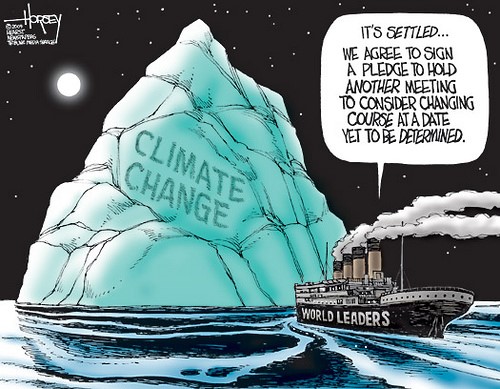 High-level delegates from the Govern-ments met in Madrid for the second week of crucial UN talks on the global response to the climate emergency.  Campaigners have been frustrated by the slow pace of the negotiations, despite growing public clamor, including a 500,000-strong march through the center of the Spanish capital led by the Swedish climate activist Greta Thunberg. 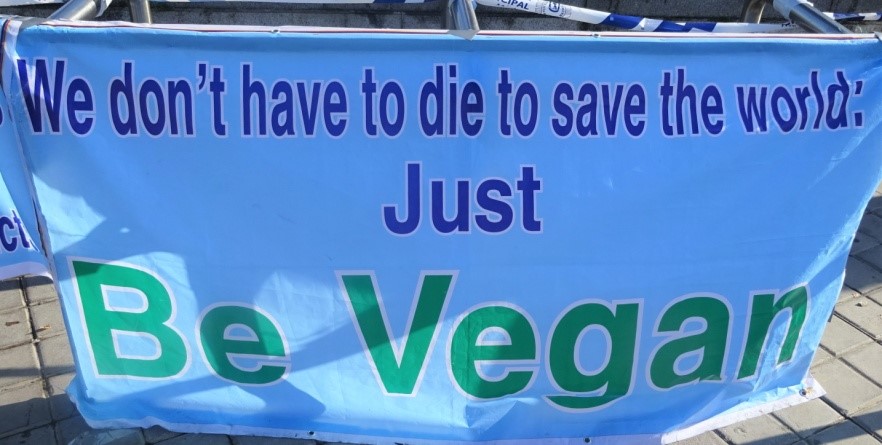 Rachel Kennerley, a climate campaigner at Friends of the Earth, said: “We’re in a climate emergency – the impacts are coming thicker and faster every day.  This latest research is yet more in an ever-growing pile of evidence which shows we need real action, not warm words.  Govern-ments need to stop dragging their feet and deliver real emissions cuts and real support for vulnerable people already experiencing the devastating effects of climate breakdown.”

A gathering of 20 people from the interfaith community came together for training in the Dominican Assembly Hall in the center of Madrid.  Father Gomez, Dominican Family, welcomed the gathering.  BK Marta from the Brahma Kumaris center in Barcelona led the meditation for the group.  She then stayed all day as a translator. 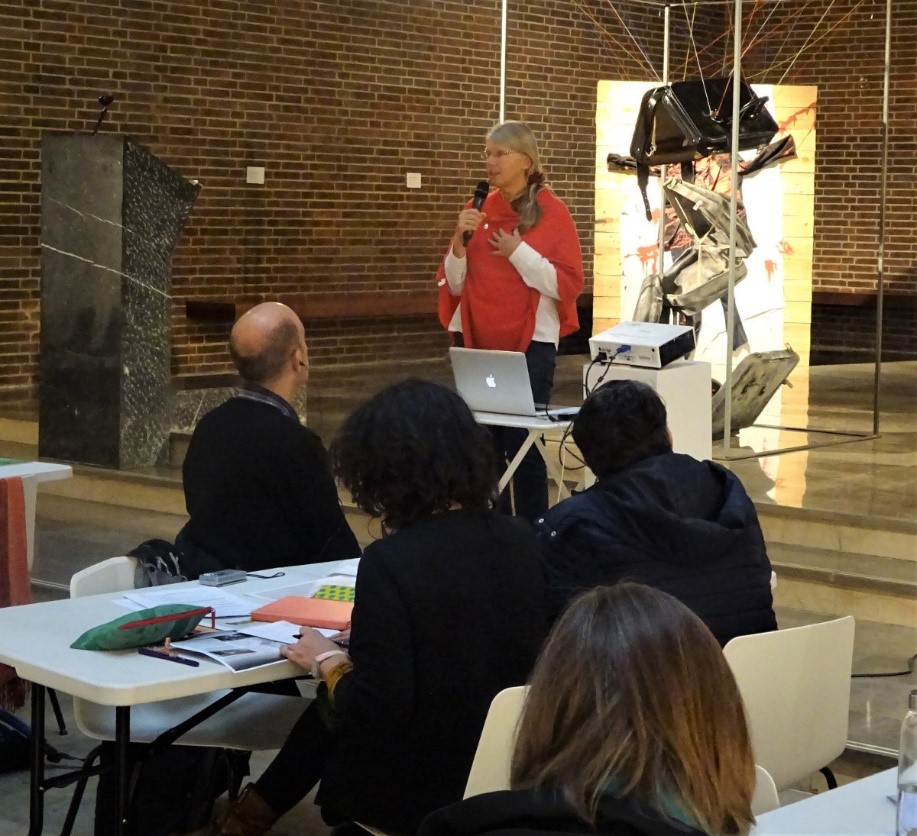 BK Sonja was invited to share “How can we mobilize our faith communities?” BK Sonja pointed out that communication plays a major role in mobilizing the Brahma Kumaris community – everything from the webpage, twitter, facebook, instagram, newsletters, COP reports, leaflets, blessing cards, and wristbands.  Finding the right language is important; no one likes to be an environment coordinator in their country, but everyone likes to be a green angel.  The final remarks were given by Manoj Kurian, World Council of Churches and Sonja.  Manoj spoke about the duty to love everyone in the world as a child of God.  BK Sonja spoke about removing inner pollution and waste in order for the same to happen on the outside. 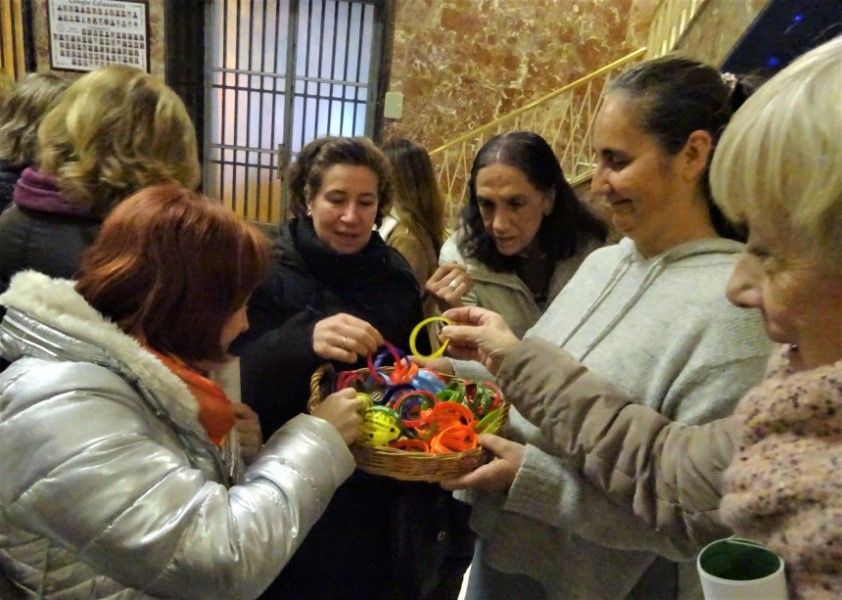 Side event, Al Gore, Chairman of the Climate Reality Project

BK Julia and BK Shantanu attended a session by Al Gore, former Vice President of the USA.  In his presentation “The Climate Crisis and its Solutions,” he gave vivid visual examples of climate-associated tragedies around the world.  Though this crisis is emotionally difficult to absorb, we do have answers and have to urgently raise our ambitions and implement them.  We are transformative beings.  We have limitations, but we can rise up above our limitations when faced with severe peril.

“After the final no there comes a yes, and on that yes the future world depends” – Wallace Stevens 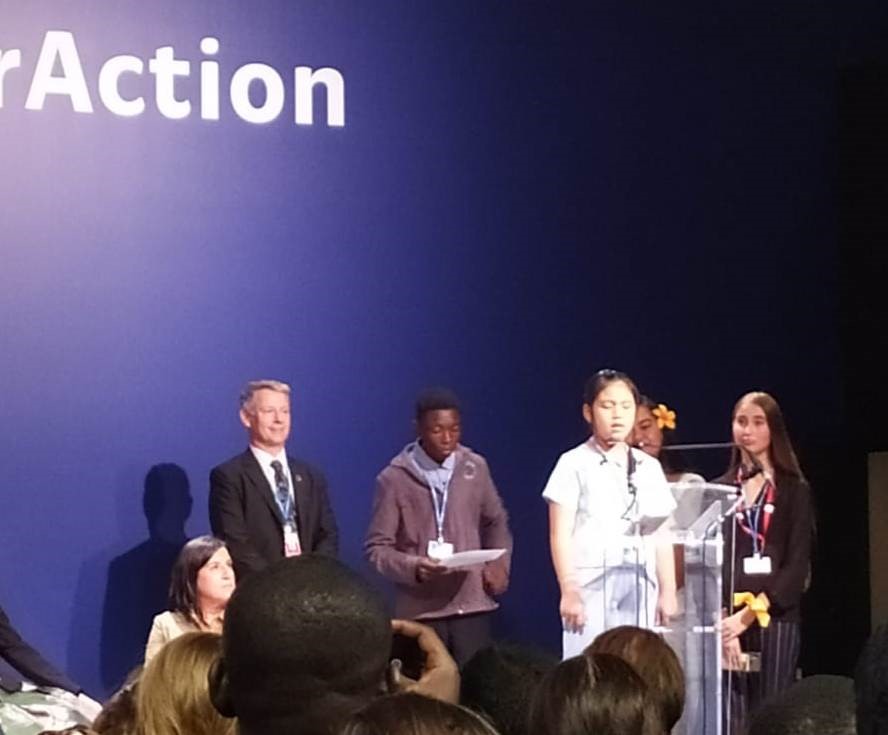 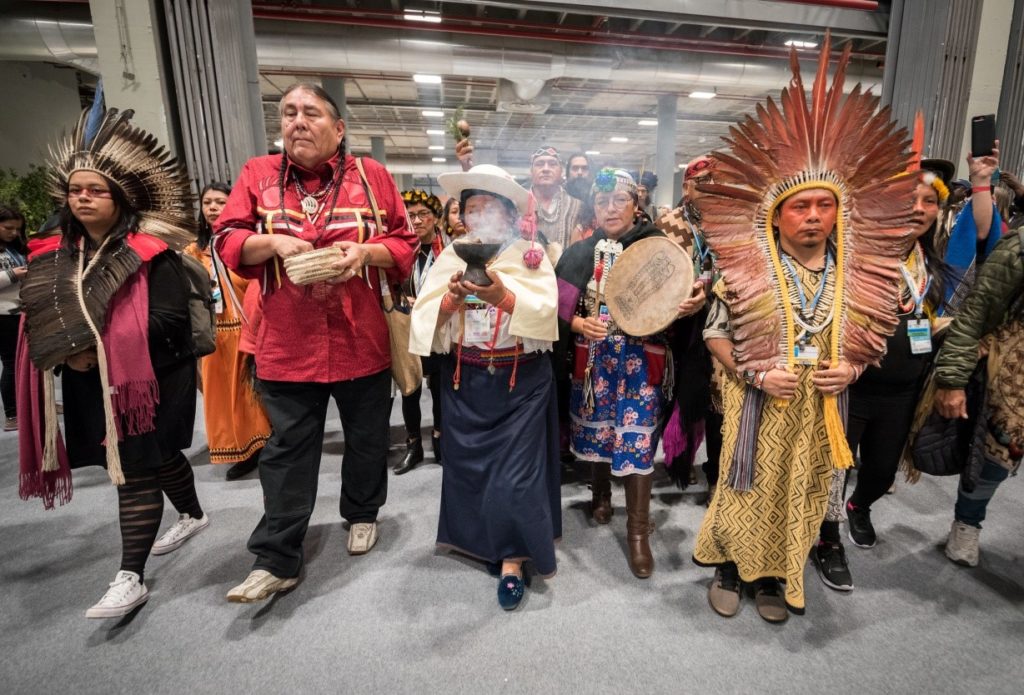 BK Shantanu attended a high-level panel with five Ministers and five children/youth activists who shared their ideas on the actions needed.  The world’s youngest climate activist, 8-year-old Licypriya Kangjum from India, was one of the young speakers. BK Shantanu also attended a smoke ceremony by the indigenous people.