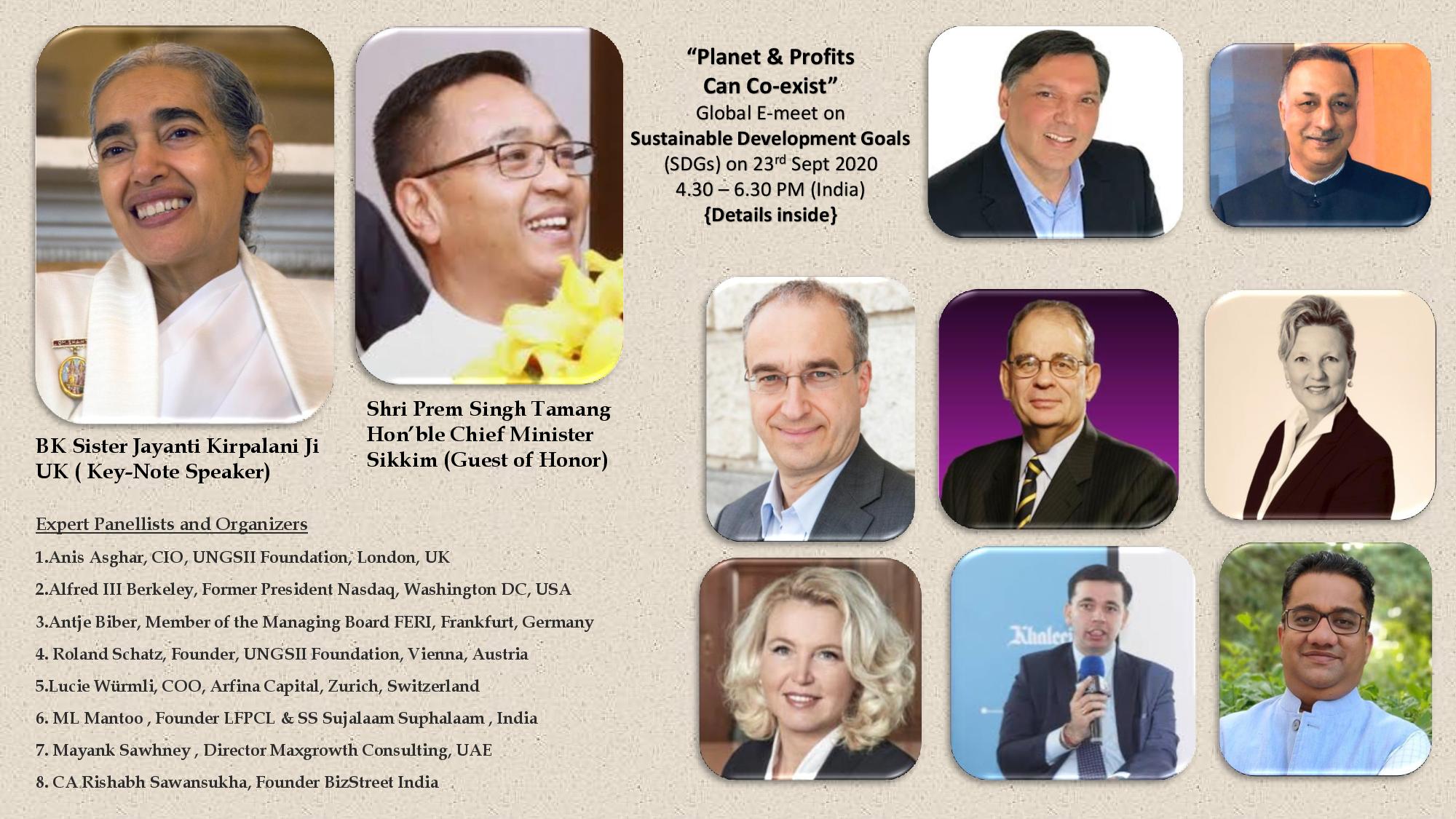 Zoom Registration (Open to All) : https://bit.ly/GlobalSDGMeet

3. Antje Biber, Member of the Managing Board, FERI, Frankfurt, Germany

3:06 – 3:18 PM – Keynote Speech by Sister BK Jayanti Kirpalani Ji, Director of Brahma Kumaris (BK) for Europe and the Middle East, and a spiritual leader and teacher for 50 years. She has championed the co-operative role of spiritual organisations in creating a just and peaceful world. Sister Jayanti has been the organisation’s representative to the UN in Geneva since 1982, where Brahma Kumaris is accredited with General Consultative Status with the Economic and Social Council (ECOSOC).

As Director of Brahma Kumaris (BK) for Europe and the Middle East and a spiritual leader and teacher for 50 years, BK Sister Jayanti ji has dedicated her life to self-transformation and service to humanity. Brahma Kumaris is an international non-governmental organization (NGO) of the United Nations, accredited with General Consultative Status with the Economic and Social Council (ECOSOC), and Sister Jayanti has been the organisation’s representative to the UN in Geneva since 1982. She has championed the co-operative role of spiritual organizations in creating a just and peaceful world. She has brought spiritual principles to the discussion tables of politicians, economists, business leaders, scientists and nearly every stakeholder of our times. Sister Jayanti sees the erosion of spiritual values as the underlying cause of the crises that the world is facing today.

Brahma Kumaris is an international non-governmental organization known for its spiritual teaching of Rajyoga Meditation with its HQ in Mount Abu, India. Brahma Kumaris is the largest spiritual organization in the world led by women. It was the founder, Prajapita Brahma Baba, who chose to put women in front from the very beginning, and it has set Brahma Kumaris apart on the stage of the world’s religions and spiritual organisations. For more than 84 years, the leadership has been characterised by steady courage, a capacity for forgiveness, and a deep commitment to unity. Founded in India in 1937, Brahma Kumaris has spread to over 110 countries on all continents and has had an extensive impact in many sectors as an international NGO. Brahma Kumaris facilitated millions of tree plantings as part of the duty towards Mother Earth. The BKs are imparting training for Organic, Yogic and Vedic Farming to create Raj-Rishi Villages where healthy food is grown, and Spiritual and Prosperous Farmers can live in sync with Nature. BKs have sent sizeable delegations to most major UN Conferences over the decades, including Nairobi, Rio, Beijing, Copenhagen, and Istanbul. In pursuing the goal of upholding the human rights of all people, BKs work with UNICEF and UNESCO at UN headquarters and within national committees and commissions, promoting value-based programmes and initiatives through our local and national centers. These often include activities specifically designed for women, youth and children.

Shri Prem Singh Tamang (born 5 February 1968), better known as P. S. Golay, is an Indian politician and the current Chief Minister of Sikkim and leader and founder of the Sikkim Krantikari Morcha (SKM). Prior to forming the party, he was a key member of the Sikkim Democratic Front (SDF) Party.

Shri Tamang was born on 5 February 1968 in the Nepali family of Shri Kalu Singh Tamang and Mrs. Dhan Maya Tamang. He hails from Singling Busty, West Sikkim. He graduated with a degree in Bachelor of Arts from Darjeeling Government College in 1988. After graduation, he worked as a teacher in a state-run school. His son is politician Aditya Tamang, who is also a member of Sikkim Legislative Assembly from Soreng-Chakung.

In 2003, Sikkim stopped imports of chemical fertilizers in the State, and since then the cultivatable land there is practically organic and farmers of Sikkim are traditional users of organic manure. Sikkim is the first organic state in the world. All of its farmland is certified organic.