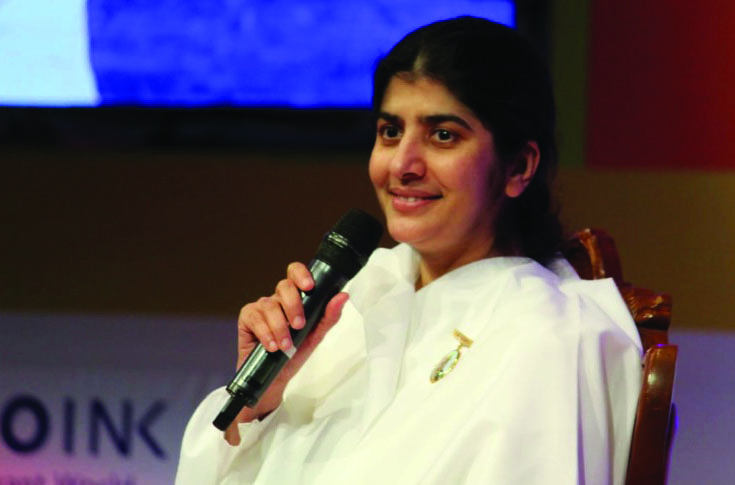 The need of the hour is to change the work culture : BK Shivani

Mumbai, Maharashtra: At the 13th edition of Print Summit, organised by BMPA, BK Shivani, a practitioner of Rajyoga Meditation of the Brahma Kumaris, shed light on the requirement of change in environment for a better growth of the organisation.

She began her spiritual speech by asking the audience to ‘pause and check’ whether they are running the race because they want to or just because the others are running, and added, “People are unaware and are unknowingly doing things which are damaging them. People are running without checking their own strengths. Is life really a competition?”

She added, “Imagine a scenario where you go out with your family, you are eating in the car, listening to music and suddenly a car comes, and you decide to race. You will still reach the destination you were heading towards, but the quality of time that you had spent in reaching, compared to the time you were spending time with your family deteriorated.”

She asked the audience to create a ‘no-anger zone’ environment in their organisation and also create a positive ambiance around the workplace.

According to Shivani, work culture these days has become too deliverable-oriented. Gone are the days that employees work at one specific company until their retirement because they lack a feeling of belonging in the organisation.

The happier the people are, the more will be the productivity. “Long working hours and working extra time doesn’t necessarily mean more productivity. A calm mind can achieve more at work in a limited amount of time,” she said.

Saying that India was named the most depressed country in 2018, and depression will be the second reason for death in 2020, Shivani said a change in the work environment is a must, as the targets are getting bigger and the mind is getting weaker, and the same stress is being transferred to their family members.

She also spoke about the importance of moral codes, ethics and principles. “People are too focused on what they achieve rather than how they achieved it. The money that you earn needs to come with the people who work with you and for whom you work,” added Shivani.

She also spoke about an emotional diet, which is what one eats, listens to and reads, and how it is vital for success. She requested all to commit one hour to self-care every day, before and prior to sleep. She concluded her speech with a moment of silence and a short oath-taking.

Shivani has been sharing practical application of spirituality and meditation on the TV programme ‘Awakening with Brahma Kumaris’, for more than nine years. In 2014, she was honoured with a women of the decade achievers’ award by ASSOCHAM’s ladies league for her excellence in empowering spiritual consciousness.

PS (Print Summit) is an annual ‘Knowledge Seminar’ hosted by The Bombay Master Printers’ Association since 2005.